What I Write About 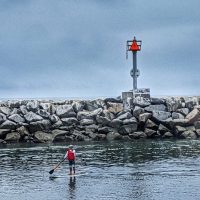 Psychosis, and the recovery time after, has a strange symptom. A sense of grandeur. A feeling as if you are spiritually connected to all around you. A feeling of telekinetic powers. For me, anyway.

During this time I met a horse. A neighbor of my father’s property in Tennessee. “A mean horse,” my father had warned. Well, with all the confidence in the world I walked down the hill and to the fence where the horse was standing.

It was sunny out, the middle of September. My heart had already been ripped from my chest and I was searching for an animal familiar to me.

The grass where the horse stood was nibbled short and he was trying to reach some of the longer, sweeter grasses on my father’s property. But barbed wire was strung along the fence, in areas where the horse might poke his head through.

His nose was scratched. Foolishly, I tried to pull the barbed wire loose. Nothing happened. So, I reached down and pulled up big handfuls of grass and passed them to the horse. Greedily, he munched.

“This is me,” I said, shaking my silver chain, which at the time hung round my neck with Bella’s tag attached. It jingled and the horse pricked his ears. I fed him more grasses.

Then, I kissed his nose.

I was raised around horses but generally fear them, which in turn makes them fear me. I hope this horse doesn’t fear me the next time I see him, because he was just the connection I needed.

I'm just a skinny girl with a lot of hair and a couple of stories. I'm 26, married, and have two very active, sparkly-eyed babies. My mother lives with me so I've got my best ally and source of wisdom here, too. Everything I do is for my family. We like to garden, paint, start projects, read, and watch a little bit of Netflix. I'm working on my cooking, parenting with patience, and learning how to love life where I'm at. Though I've abandoned my degree three times in two different states (yes, I said three times), I have listened and watched and picked up a couple of tips. Most of what I write is entirely non-fictional because I let life spin the tales. I'm ready to learn more and am excited to meet others on the same path. This is to serve as a record of what I've done. All pictures have been taken by me, unless otherwise credited. View all posts by Alexandra A

One thought on “All Was Connected”

This site uses Akismet to reduce spam. Learn how your comment data is processed.